If You Work With A MFP – Copier, Your Information May Be At High Risk – Beware of your data during your copier rental

In the world today, we have to take measures so we don’t have our PIN numbers stolen, or so we aren’t duped into giving someone our banking information online. Thankfully we are all able to remain financially and physically safe for the most part. But there are ways to steal a person’s identity or financial information that many are unaware of. One tiny mistake can lead to a huge disaster. You may not think so, but things like identity theft are very real. The scariest part is that it can happen from almost anywhere. It can even happen from places that you may not even expect. Do you use a copier at work? Have you ever had your ID or social security card scanned at a hospital? Perhaps at the DMV? If so, your information could be at a higher level of risk than you ever thought.

How is this possible you may ask? Here is some scary information.

Almost every copier has a hard drive installed that keeps a copy of every image that it’s ever scanned. It is a scary thought in itself to know that someone could take all of your information via the ATM or lost credit cards. It’s even more terrifying to know that some copying machine out there could have all of your information stored on its hard drive. The unfortunate thing is that most people don’t know that digital copiers contain hard drives, usually they go completely unnoticed. Some 60% of Americans today have no clue that their digital copiers have hard drives. Every computer has a hard drive where it stores its data digitally. It’s the same case for copiers.

When you decide to clean up a computer and dump files, it seems almost like second nature, but that’s not necessarily the case when dealing with a copier. You’re more than likely not going to think about it because, to you, it’s just doing its job. That being said, used copiers often go for sale without having their hard drives wiped. This is due to the fact that the people using them were completely unaware. Most of these used copiers are sold for cheap, obviously in an attempt to move the products quickly. Should someone with the right know-how for identity theft get a hold of one of them, these copiers could become a literal gold mine for them. Everything from stealing your identity to accessing your bank accounts and wiping them clean could be in their plans.

These copiers can become a huge risk on your privacy and personal information. When the purchase of a used copiers is made, you may not know where it came from. It could have come from a hospital, a police precinct, or a high school library. You never know. The point is to become aware of the danger and do something about it. If you know you’re going to get rid of a copier that you’ve been using, do yourself a favor and wipe the hard drive clean or just get a new one entirely.

If you find yourself in need or use often rental copiers for conventions or war rooms, you need to make sure the copiers used are current equipment, the newer copiers have the a feature that can delete or reformat the HDD of the copier. 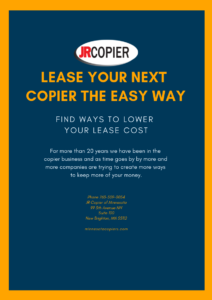